Networking for Introverts – My Personal Experience

When I worked as a scientist in a large company, ‘networking’ was a euphemism for staying up late in the bar at a conference…(!)

Little did I know then that I would later spend many an early morning, networking over breakfast – in hotels, pubs, cafes, golf clubs, a casino…(!)

As mentioned elsewhere (About Me), I’m a self-confessed introvert – which means that while I can love being ‘on stage’ running a workshop or teaching a dance class, I don’t do ‘small talk’ easily.

(For more on introverts see Susan Cain’s TED talk – I love the introduction and the description of the summer camp experience vs expectation! – or her wonderful book Quiet: The Power of Introverts in a World That Can’t Stop Talking).

There are quite a few blog posts and articles on networking and how to network as an introvert, this is my personal experience from attending around 50 networking meetings over the last half year…

(One way to network that may be easier as an introvert is online. I love joining in my local Twitter hour, but I’m focussing here on (potentially scary!) face-to-face networking…)

As I started to grow my business, I realised it was going to be important for me to try something new and be more visible – something that at first felt pretty strange…

To my relief, I have found that networking is not about ‘selling’ me or my services, neither is it populated with brash salesmen (or women) but rather it is a way of meeting other people who are sharing similar experiences of running a business – like-minded people who may become clients, but often become suppliers, collaborators or even friends :)

In lots of ‘how to’ guides on networking, I have been thankful to find the advice to ‘ask questions’ rather than talk mainly about me and my business – how fabulous is that to hear as an introvert who is also a coach!!

I’ve discovered that there are many types of networking meetings, at very different venues and at different times of day. Some suit me better than others…

When I started networking and trying out different networking meetings I kept a log of how I felt after each meeting, and what were the pluses and minuses of each.

Networking can be a significant time (and financial) investment.

How to make it an enjoyable as well as productive experience??

The format of the networking meeting makes a huge difference to me and my level of comfort. Again, as an introvert, I’m happy to stand up and talk to an audience – in fact, I enjoy it :) – whether it’s to give a talk or in a 40/60-second introduction round – but I find ‘cocktail-party’-type mingling more awkward…

How to join a conversation that’s already happening??

I’ve found that a happy medium for me is a mixture of formal and informal, structured and unstructured – some (limited) ‘free’ networking time, time to hear who everyone is and what they do, an interesting short talk, and the opportunity to talk one-to-one with the people I find most interesting in the room – and then to follow up later and in more depth over a coffee with those I really connect with.

Networking at different times of the day

I like to try and be home with my family in the evenings and I’ve been surprised to find that early morning meetings are not as bad as I’ve always thought!
(although there is early and there is really early!)

I’ve seen some spectacular sunrises this last winter and, since the days are getting longer, it’s sometimes a pleasure to be out and about early!

My personal coping strategy for early morning meetings is to avoid making any decisions first thing! I have my ‘networking bag’ always packed with my networking badge, business cards, promotional materials and pens, and I have my roller banner (complete with picture of me – not bad for an introvert!) stashed in the boot of my car at all times – as well as having planned what to wear ahead of time etc. 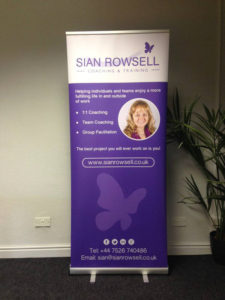 Being more visible. Networking for introverts

One tip for networking when you’re an introvert

One tip from me is: be kind to yourself and give yourself time to recover – if networking events take a lot of your energy, schedule in some recovery time later in the day – even if it’s just a quiet drive home after the event – or if you need it, during the event (I have heard that a surprising number of people take a quick ‘time out’ in the loo/bathroom! – it may even be where you meet a kindred spirit!)

What I’ve found is that, on the whole, networking events (and maybe I’ve been lucky in my choices) are friendly rather than scary, supportive rather than competitive…

What are your experiences of networking? What strategies do you employ?

Let me know your thoughts on networking by adding your comments below..

To find out how I can support and challenge you in being more visible in your business, please get in touch via the contact form or call me on +44 7526 740486.

Are you raising your profile?

Do you have your stories ready?

Being Brave in Business
Scroll to top