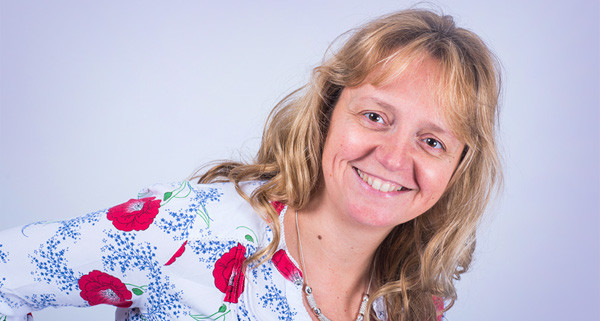 My recent experience of being on local radio!

Towards the end of last year, I set myself the challenge of presenting a meeting via Facebook Live. Having managed my first public broadcast, I decided it was time for my next visibility challenge..!

I sponsor my local radio station, Canalside Radio and had been offered the chance to come in to be interviewed – so that I could explain more about what coaching involves…

I sat on this offer for over a year.

At the end of March, when I was getting ready for my Facebook Live broadcast, I bit the bullet and contacted Nick Wright at Canalside to see if I could have an interview slot later in the year – in early May.

The day before my scheduled interview, I attended a networking event organised by Sue France (Creative Connecting in Cheshire). By coincidence, the topic was Make Yourself A Little Bit Famous and Gain The Competitive Edge. The guest speaker was Penny Haslam and one of the panel speakers was Liz Southall from another local radio station, RedShift Radio.

Penny and Liz encouraged the attendees to gain the competitive edge by raising our visibility. One of the ways suggested to increase ‘exposure’ for our businesses, was by going on local radio… Great timing!

I had a quick chat to both ladies at the end of the event, told them about my interview the following morning, and both were very encouraging! Penny also directed me to some great tips for preparing for going on the radio on her website.

At the end of the event, Sue France announced that she would be hosting a networking day at RedShift radio on June 15th and that attendees could take part in a short interview, live on air, during the day. I thought this was too much of an opportunity to miss and signed up that afternoon – before I worried too much about it!

Being interviewed for Canalside Radio

The following morning I headed down to the Canalside Radio studios in Bollington, near Macclesfield. I was given a warm welcome and a coffee by Brian Moores, who told me some of the background to the radio station and his personal involvement. After a quick tour, we headed into the studio to record my interview.

With a sudden attack of nerves I checked with Brian:

“If it all goes horribly wrong can we stop and start again?!”

He said yes, but that it wouldn’t!

The interview was fine – even talking into the microphone didn’t seem too strange after a bit!

After the interview, Brian took me into the studio where live broadcasts are produced and we listened to the first couple of minutes of the interview which he said sounded fine :) . I then watched Brian schedule the interview for 11am that morning.

And here it is – my interview with Brian Moores:

I’ve managed to listen to it a few times. Is it weird to hear myself talking and the words I use?

As I left the studio and went for a restorative cup of tea in the cafe next door, I realised I hadn’t taken a picture of myself at the station – rookie mistake!!

So, I took a picture of myself just outside on my way back to the car… 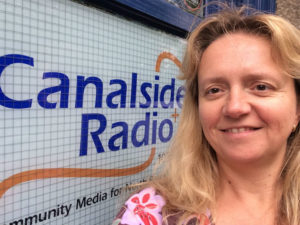 Being interviewed on RedShift Radio

Fast forward a month, and suddenly last Thursday it was the day to go to RedShift Radio in Nantwich.

As part of a lovely day networking with a small group of women business owners, at our allotted times, we went off to be interviewed by Liz Southall in the studio.

That’s when I realised that there was more new stuff to get used to – not only was this interview going to be live(!), I was going to be interviewed together with someone else – Bernadette Willems. (Bernadette and I already know each other through networking, so that was nice).

As it turned out, while being interviewed, I was completely unaware of the ‘on air’ part…

Being interviewed as a pair was interesting – at times I got completely engrossed in Bernadette’s answers!

And here is our Scarlet Ladies – Women in Business interview with Liz Southall:

This time I remembered to get a picture taken before leaving the studio! 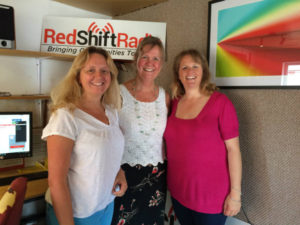 So, having managed my first local radio interviews, it’s time for my next visibility challenge!

What should I tackle next??

I am having a talk filmed next month – one year on from being filmed last year, will my knees still shake?

Have you been on local radio? What was your experience?

Please let me know your thoughts by adding your comments below…

Are you getting plenty of exposure?

Whether you’re a business owner, or employed in a larger organisation, are you raising your visibility?

How are you making use of opportunities near you?

To find out how I can help you take action to raise your profile, bring out the best in you, help and inspire you to grow and improve, please get in touch via the contact form or call me on +44 7526 740486.

[To get your free copy of my eBook ’10 questions to ask yourself about your business’, sign up for my fortnightly newsletter using the sign up box on the top right of this page, or at the foot of the page if you’re viewing on a mobile device.]

Avoiding burnout as a business owner

Last quarter of the year…